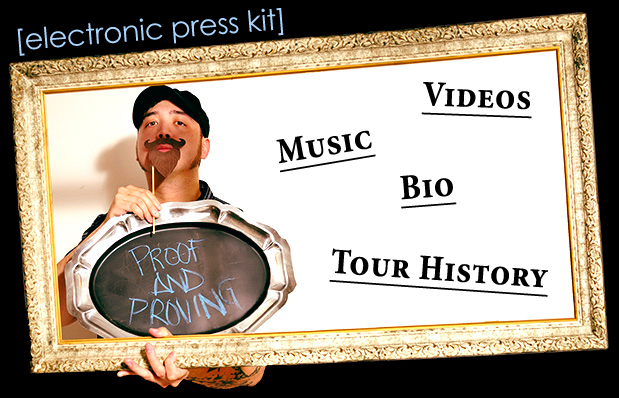 Proof and Proving's bio is short and to the point: "i drink acoustic and play alcohol."

A humorous testament to sole member singer/guitarist Brian's live show; which is juxtaposed to the serious and heartfelt subject matter of his songs. After playing hundreds of shows over the years (see tour history) Brian has had the pleasure of performing in most of the fifty United States, three Canadian provinces, and sixteen countries; but most importantly he has honed his musical style. Mixing dissonant chords with sincere lyrics Proof and Proving is, stylistically speaking, not too much unlike the sounds of Tim Barry, Chuck Regan, or John Samson - a singer/songwriter acoustic approach from a musician who grew up in the punk rock and hardcore scene.

Brian currently resides in outside Philadelphia, Pennsylvania, and is a voting member of The Recording Academy as well as a District Advocate (formally GRAMMYS In My District). In addition to his solo acts Proof and Proving, Baroquen Bass, and JunioR, Brian also records/mixes/masters/produces Philadelphia-area bands.

Record Label: The Art Is Not Dead Records